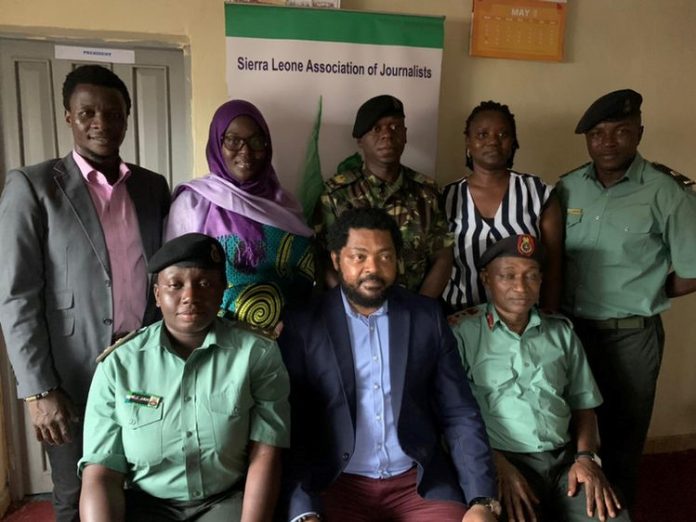 The Sierra Leone Association of Journalists (SLAJ), and the Media Wing of the Republic of Sierra Leone Armed Forces (RSLAF), are working towards removing obstacles that suppress press freedom and the beating of journalists in the country.

Following a press statement from SLAJ, condemning an alleged beating of a journalist in the Western Rural District by personnel of the RSLAF, the two bodies have come to terms to condemn the act, and are weighing options for a lasting solution.

In a press release dated July 8, 2022, on an assault on journalist, Maada Jessie Jengo of Voice of Peace and Development Radio, by RSLAF personnel, the Ministry of Defence confirmed that “the soldiers have been identified and an investigation into the allegations is ongoing by military procedures.”

The Ministry of Defense assures SLAJ and the general public of their respect for “the rule of law.” Hence, they express how regretful they are of the unfortunate occurrence, which, according to them, “does not represent the RSLAF core values of good discipline and selfless service.”

This statement came after SLAJ in a press release dated July 4, 2022, reported on an alleged assault of a journalist by personnel of the RSLAF, after altercations between the soldiers and the journalist at Waterloo.

The media statement on the issue prompted the media wing of the military, led by its Director, Colonel Abu Bakarr Bah, who, along with other senior officers, paid a courtesy call to the Sierra Leone Association of Journalists (SLAJ), to discuss emerging issues and map out ways of strengthening the relationship between the two institutions.

Their meeting on July 7, 2022, at SLAJ Headquarters, 56 Campbell Street, Freetown, was used to not only identify obstacles between the two but also to agree on the way forward.

The RSLAF Director of Communication, Colonel Abu Bakarr Bah, underscored the importance of the media in nation-building and that both the media and the military perform similar roles in serving the public’s interest and are accountable to the public, but their responsibilities are different.

The two institutions during their meeting mapped out issues including how SLAJ can accommodate the RSLAF media team, who are graduates from the University of Sierra Leone, as members of SLAJ; capacity-building opportunities; how both RSLAF and SLAJ will sensitize their members on how to treat and relate with one another; and how best they can understand their roles and responsibilities while performing their various functions, as the media needs security to do their work effectively; likewise, the military needs the media to inform the public about its operations and promote the image of the force.

The President of SLAJ, Ahmed Sahid Nasralla, said, “There is every need for us to work together, the Army, the Police, and the Media, and support one another in the interest of our nation.” I want to see a situation where the public will see us working together amicably with respect and a shared goal to ensure the safety and security of the electorate, including politicians generally, on the one hand, and free, fair, non-violent, transparent, and credible elections come 2023. “

Nasralla reminds us of the Memorandum of Understanding (MoU) they had with the security forces, saying, “The MoU with the security sector is a huge step towards strengthening media-security relations and promoting cooperation and coordination.”

He went on. It’s a big opportunity that is not common in most African countries or even the world. What we have not yet done, however, is to ensure every member of our institutions is aware of the content of the MoU, its objectives, and the relationship we are trying to forge to prevent conflict and promote both our images and the work that we do. I think that should be the next step we should take, and then organize continuous training sessions to build our capacities and address emerging issues, “he reiterates.