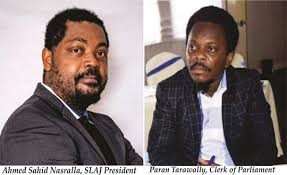 The Sierra Leone Association of Journalists (SLAJ) has held a meeting with the Clerk of Parliament, Hon Umarr Paran Tarawally, in his office at the Parliament, on the alleged assault of journalist Abdulai Gbla by Member of Parliament Hon. Abdul Muniru Lansana.

The meeting was also attended by the alleged victim Abdulai Gbla.

He said the Clerk started by acknowledging receipt of the letter from SLAJ requesting Parliament to investigate the alleged assault and take appropriate action.

Alhaji went on that Hon. Tarawally further apologised to Gbla on behalf of the Speaker and Parliament for what he described as ‘the unfortunate incident’ of 28th June 2022, and noted that his apology was based on the fact that the alleged incident was widely reported on social media rather than an outcome of an investigation.

He revealed that the Speaker has engaged him on the issue and requested him to look into the matter, which was why he thought it fit to engage the SLAJ Executive and apologise to Gbla before commencing an investigation.

It was agreed that Parliament will constitute a Committee to investigate the incident and make recommendations. The Committee shall include journalist Abdulai Gbla and a representative from the SLAJ Executive.

The Committee shall conclude their investigation by tomorrow Friday 15th July 2022 and would decide on the next steps.

On The SLPPG, it was agreed that a meeting is held tomorrow Friday to engage on the issues of the SLPPG Interim Executive, Outgoing Executive and media accreditation.