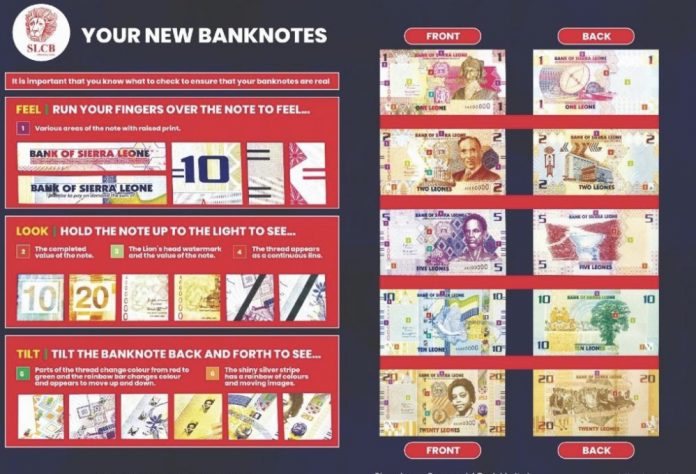 The Sierra Leone Commercial Bank (SLCB) has spearheaded the charge in educating the people about the new Leones and cents-based currency.

It can be recalled that Sierra Leone will shortly replace its present currency with new re-denomination Leone notes and cents.

SLCB has put up displays of the new notes and cents at all of its branches and other outlets around the country to give value to all of its stakeholders, including the Bank of Sierra Leone.

It has created advertisements and flyers displaying the new currency for transmission and popularisation across the country. Three zeros have been removed from the new Leone, which has the same value as the previous Leone.

His previous assignment was as Managing Director of the Commerce and Mortgage Bank, PLC.

Mr Silla continues to vigorously drive SLCB’s digital transformation targeted at boosting the bank’s portfolio, having successfully moved the Mortgage Bank from a loss-making position of Le28 billion to a pre-tax profit of Le14.6 billion in the bank’s 2020 audited financial statement.

His vision for pushing SLCB to new heights includes staff training and motivation, as well as maintaining an organisational structure that is capable of meeting all of the departments’ goals and objectives.