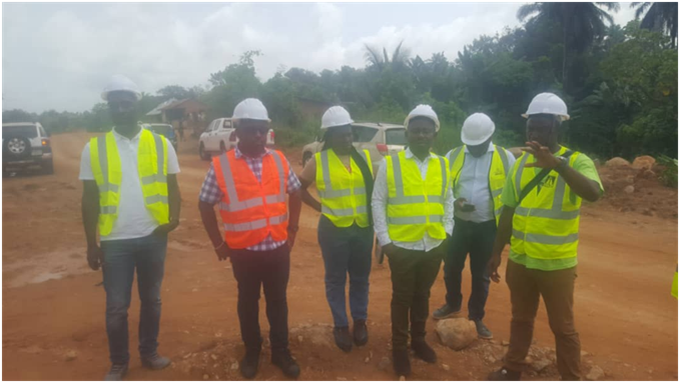 The Director General of the Sierra Leone Roads Authority, Ing Amara Kanneh, together with staff at the Sierra Leone Roads Authority and management of the GuicoPres Road Construction Company has made a site inspection on the construction of the USD$94 million Sefadu – Kamiendor – Guinea Border Road, to monitor and assess the progress of work funded under the 11th European Union Development Fund (EDF) as support to the key infrastructure sector in Sierra Leone.
The reason for the visit was to assess progress, monitor timelines, discuss challenges with stakeholders and also inform the general public on the progress of the quality of work and technicalities involved in the construction of the road.  The SLRA Director General Ing Amara Kanneh stated that they, as an institution, usually consider safety, durability, environmental and social issues whenever they are planning and budgeting for road construction projects.
He noted that, having looked at the progress so far and also listening to the contractors and the technical supervisory body of SLRA, he was very much impressed with the construction work. It goes in line with the aspirations of both the European Union and the Government of Sierra Leone to improve the country’s key infrastructure.
The Managing Director of GuicoPres (SL) Ltd., Youssouf Decazy Camara, assured the SLRA Boss Ing Kanneh and his team that GuicoPres will do a great job on the Sefadu–Kamiendor–Guinea Border Road with such speed that the people of Kono District will appreciate it.
He said the road will traverse five chiefdoms and benefit seven chiefdoms along the road to the border, which will see several bridges and culverts of high quality.

He also assured the communities that affected property owners would be paid and that safety was GuicoPres’s watchword when constructing the road.

A community elder along the road, John Yambasu, expressed his appreciation for the road work, stating that they are fortunate to form part of the people that will see tarred roads in their district.
He said they had suffered greatly as a result of the rebel war with absolutely no sign of development in the district but praised President Julius Maada Bio for fulfilling his promise of bringing development to the Kono district the construction work is expected to be completed in 36 months with an additional 12-month defect liability period. The USD 94 million road projects will be financed and constructed by GuicoPres, and the Government of Sierra Leone will start repayment after the former has completed at least 10 kilometers of construction works to the asphaltic level, including ancillary works.