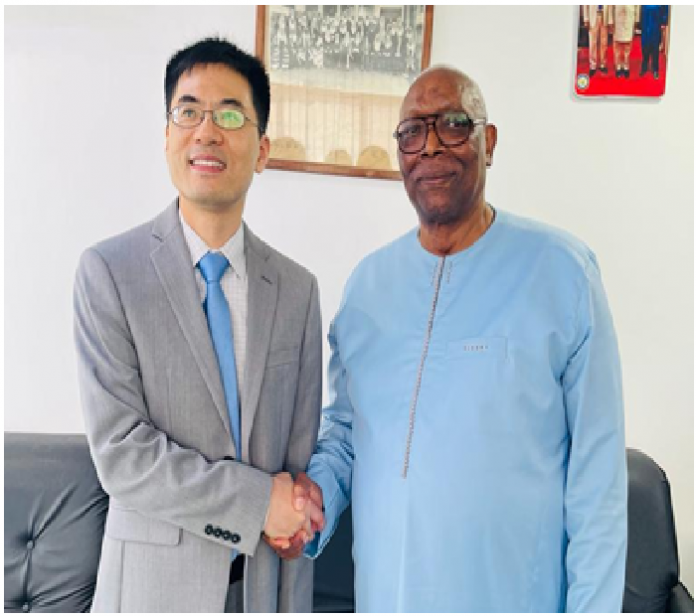 The Ambassador said among other things that he had presented his letter of credence to President Julius Maada Bio and that he was impressed with Sierra Leone since his week-long arrival in the country.

He said part of his tour of duty was to promote the One China Policy and to deepen bilateral relationships between China and Sierra Leone through mutual respect and cooperation. He also spoke on the assistance China provided to Sierra Leone during the outbreak of the COVID-19 pandemic in the country.

He called on Presidents Xi Jinping and Julius Maada Bio to keep the momentum for the mutual benefits of China and Sierra Leone. He also conveyed warmest greetings from the Speaker of the National Congress of China and spoke on the need to improve on exchange programmes between the two countries.

Further, he said China was willing to work closely with Sierra Leone in all areas including Sierra Leone Co-chairing the UN Initiative on Global Education and Chair for C-10 aimed at giving Africa a stronger voice and place at the United Nations, and to promote the One China Policy, an initiative aimed at the transformation of China.

Welcoming the new Chinese Ambassador to the Republic of Sierra Leone, the Speaker of Parliament, Hon. Dr. Abass Bundu said Parliament had built a stronger relationship with his predecessors, and assured him of working to deepen and strengthen bilateral relationships between the two countries.

Speaking on a coordinated approach, he said Parliament would work with the Executive to present its development needs including capacity building to the Chinese Government for assistance.

In view of solidarity, he informed the new Ambassador that Sierra Leone Parliament had adopted a resolution during the outbreak of the COVID-19 pandemic in China for effectively handling the disease and for its continued assistance to the Republic of Sierra Leone.

He also informed Ambassador Qing that he would be invited to a Sitting of Parliament through the Embassy to further recognize Chinese assistance to the Government and the People of Sierra Leone.

Ambassador Manuel Muller recalled the last meeting Mr. Speaker had with diplomats and said that this time his visit was predicated on EU’s assistance to Parliament.

He spoke on the need to determine implementation of the Bo Declaration of 2019, and progress on the reviews of the Standing Orders of Parliament in light of stakeholders’ inputs to reflect the current realities in Parliament.

He also said he wanted to know what are the plans to take the reviews forward and its subsequent adoption by Parliament.

Ambassador Muller spoke about an EU electoral assessment team that will soon come to the country and will meet with all the political actors in the country for the purposes of determining the existence of appropriate conditions for the holding of competitive, democratic, transparent and credible elections that will be generally acceptable by all and sundry. He said the EU advance election assessment team will also measure progress on the implementation of the recommendations of the last EU election observation team to Sierra Leone.

He assured of EU’s continued support to election and the promotion of democratic competition in the country. He also called on political parties to comply with the rule of law for electoral purposes.

He also said that such a review will generate debate across the aisle and may take into consideration emerging developments.

He also thanked the EU for its continued assistance to Parliament, and expressed dissatisfaction on some of the work done by UNOPS contractor. He said he had set up a committee regarding same and he is waiting to receive the technical report which he will eventually share with the EU on the status of the implementation of the EU parliamentary renovation project.

He also said that the country is in readiness for the conduct of the 2023 general elections, and called on all political parties fielding candidates for those elections to endeavor to conform with democratic principles as mandatorily enshrined in the national laws of the land.

He stressed that democracy and respect for the rule of law are not mutually exclusive and therefore called on all political parties to be democratic within their internal structures as required by law within the stipulated time, so that we will have an election that is peaceful, transparent, democratic and generally accepted by all and sundry.