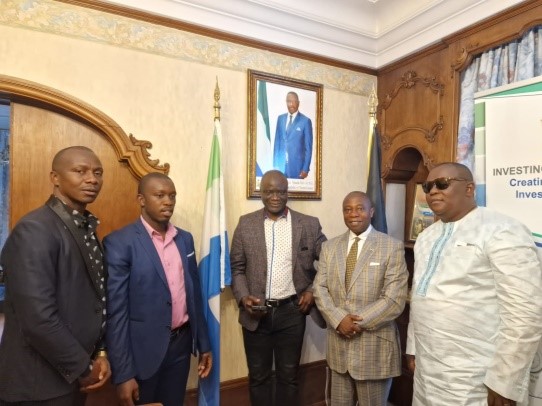 As they continued their engagement with different sporting disciplines in Belgium, members of the National Sports Authority (NSA) met with the Head of Unit Sport of the Directorate-General for Education, Youth Sport and Culture of the European Commission, where they called on the organization and other institutions within the European Union (EU) to support the sporting disciplines in Sierra Leone.

During the engagement, the Deputy Director of NSA, Dr Abdual Rahaman Swaray, said the Government had prioritized sport as one of its key deliverables, however, there were competing demands for the available resources as a nation. “Therefore, we were tasked to establish relationships and see how we could get support from elsewhere to develop the sporting disciplines in the country.”

He stated that the country is endowed with talents that can compete in the international space with the EU or even World Cup, but there are gaps between Sierra Leone and the other developed nations in terms of infrastructure, personnel, exchange of programmes, mentorship and technical training, stressing that if they are unavailable the country will be unable to compete in international tournaments.

Commissioner Katta reminded the team about the number of irregular migrations of young people and some of the dangers they go through to get to Europe with the aim of realising their dreams, but with the development of sporting facilities in Sierra Leone and by extension Africa, young people would be able to realise their potential without risking their lives to travel to Europe.

Referencing the contributions of sports to Sierra Leone, he furthered that sport could foster development, peace and unity as well as engage young people. “Realising its relevance in contributing to nation-building, it prompted us to hold conversations with the Embassy to see how we can interact with various potential partners to support the development back home.”

The Youth Commissioner believed that young people’s talents, abilities and potentials could be tapped through sports and that the NSA had been working in that regard, which was why they were soliciting technical support to leverage the capacities of the various sporting institutions in the country.

Florencia Van Houdt of the Sport Unit of the ED EAC said she was happy with the sporting approach of the NSA, involving everyone including women, girls and Persons with Disabilities (PWDs).

She noted the EU and her unit were focused on gender equality in sport, which was about promoting women and girls’ participation in sport, adding that there was cooperation between European football and Africa and also exchange programmes, which the NSA and Sierra Leone could benefit from.

She also disclosed the possibilities of linking the NSA with the Belgian Football Federation or others for exchange programmes. The Unit Head further provided potential organizations that would be willing and ready to work with the Authority.

The delegation was accompanied by Ambassador Samuel Tamba Musa, the Deputy Ambassador Harold B. Saffa the First Secretary Saifu George and the Information Attaché.