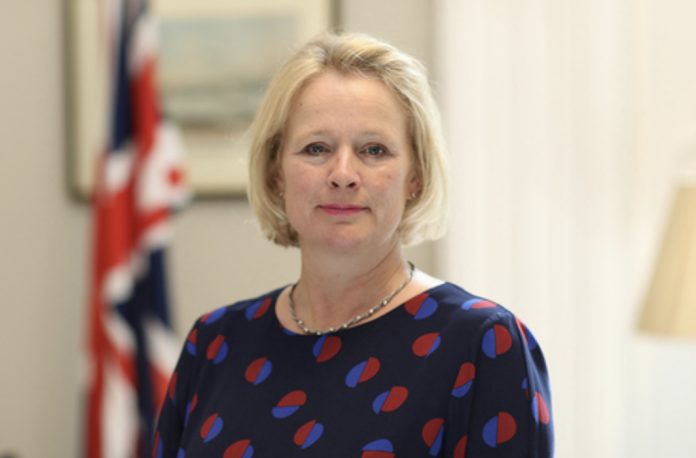 …Minister for Africa, Latin America and the Caribbean calls

Every year on 8 March the world celebrates International Women’s Day. But this year we need to do much more than just celebrate women and girls: we need to break the biases.

The past two years have demonstrated why this action is critical.

We’ve seen the devastating impact that COVID-19 has had on the livelihoods of women and access to education for both boys and girls. Disruption to health services has driven a surge in unintended pregnancies, unsafe abortions, and maternal and new-born deaths. And during lockdowns we saw a shocking rise in violence against women and girls.

Yet, women make up half of the world’s population and half the global potential.

Educating girls, empowering women and ending violence against women and children is a moral imperative for us all, and one that will have a direct positive impact on the world’s economy, health and security – accelerating inclusive growth across Africa.

That is why the British Foreign Secretary Liz Truss is committed to putting women and girls at the heart of our foreign policy.

We cannot do this alone.

A combined effort from businesses, communities, citizens and the international community is needed to tackle the discrimination, violence and inequality that hold women back.

COVID-19 has also seen dramatic increases in girls dropping out of school. The World Bank estimates that 2.6 million girls across Africa are at risk of not returning to school. In January I was in Wakiso in Uganda and had the pleasure of meeting the girls who had just returned to Onwards & Upwards School for the first time in nearly two years. Seeing their own ambition for their futures was inspiring.

If girls do not get 12 years of quality education, this doesn’t only affect their employment prospects – it also makes them more susceptible to early childhood marriage, domestic violence and violence in conflict.

And yesterday [7 March] we launched a new programme to support 1 million adolescent girls, including in Nigeria, with the knowledge and qualifications they need for employment, enterprise, and economic freedom.

Since 2010 sub-Saharan African economies are reported to have lost about $95 billion yearly because of the gender gap in the labour market.

When there is investment in women as workers, leaders and entrepreneurs, everyone benefits from their economic independence. Last month in Nigeria I announced new UK support – working with our partners at the First Bank of Nigeria and British International Investment (BII) – for women entrepreneurs across Nigeria to scale up their businesses.

Women’s empowerment also comes from sexual and reproductive health and rights and access to health services.

Women and girls are best placed to have control of their bodies; choosing if, whether and when to have children, so they can complete their education, build livelihoods and fulfil their potential.

That is why we are extending the Women’s Integrated Sexual Health (WISH) programme across Africa, enabling women, including women with disabilities, to realise their sexual and reproductive health rights. I saw this important work first hand in Senegal last year, when I visited a health clinic in a fishing neighbourhood outside Dakar and met young women benefiting from family planning advice.

We will use every lever we have to empower women and girls with the freedoms they need to succeed – including promoting women’s leadership and agency to ensure our voices are heard at all levels, from community level to national politics.

And those aren’t the only places where we want to see more women. The UK will continue to push for the full, equal and meaningful participation of women in all peace efforts, including as mediators and negotiators.

We’re also working with our partners to improve women’s economic empowerment – through schemes such as the MUVA programme in Mozambique, where the UK has used innovative approaches to increase economic opportunities for 6,000 young women as they move from education to employment.

The same commitment applies to climate change. As agreed at COP we are working with partners to integrate gender equality into national climate policies, plans, and strategies, and to increase women’s participation and leadership in all levels of climate action.

There’s great work going on. But sadly, despite all this, we all know that violence against women continues in different forms.

Female genital mutilation (FGM) is one such act of violence. At least 200 million girls and women alive today have undergone FGM, and between now and 2030, more than 45 million more girls are at risk of FGM.

The UK is proud to partner with grassroots activists, survivors and African-led movements to end FGM, such as the remarkable activist Mama Iqbal, who I met in Sudan last year. Work like hers proves that change is possible – and the good news is that change is happening. Thousands of communities have made the choice to abandon the practice – but population growth means the numbers of girls undergoing FGM continues to rise.

This year the UK will play a leading role in ending violence against women and girls, including hosting an international conference and building momentum towards a new global treaty to stop the use of rape and sexual violence in war.

I am personally committed to seeing transformation in the freedoms of women and girls, by working together with our partners across Africa to educate girls, empower women politically, socially and economically and to eradicate gender-based violence so women and girls can reach their full potential.

These are all the ways the UK Government intends to #breakthebias this International Women’s Day. How will you?