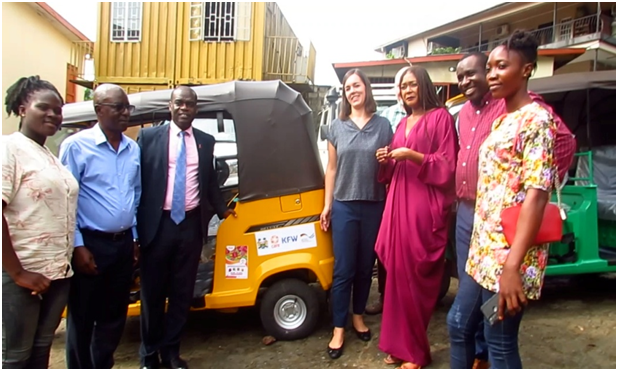 Care Sierra Leone has handed over tricycles to Happy Kids Foundation to support the operations of the foundation which is part of their HIV / Aids prevention and strengthening of women project.

The support according to the Country Director of Care Sierra Leone and Liberia, Dr. Yaikah Joof is to give economic support to women in the foundation because Care places special emphasis on strengthening women’s access to and awareness on sexual and reproductive health rights, HIV and AIDS prevention within communities.

Dr. Yaikah Joof furthered that CARE as an institution is a proponent of women’s economic justice; especially young girls. “The idea of women’s empowerment is by providing training and start-up kit to ensure that they would be able to use this input to improve on their economic status and become substantial women in their various society,” she said.

Speaking on behalf of beneficiaries, Isatu Deborah Seasay expressed her sincere appreciation to the CARE for making her the happiest person she is today. She furthered that the association has made her an outstanding person in the society.

UNAIDS Country Director,  Isaac Ahemesah, stated that women and girls are disadvantaged when it comes to HIV in the country. Among the young people that are affected with HIV, girls are vulnerable.