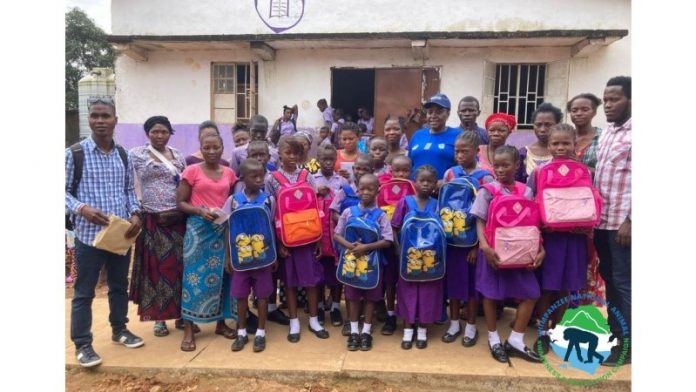 The Tacugama Chimpanzee Sanctuary (TCS) has provide scholarships and educational materials to kids who were affected by the 2017 mudslide.

TCS has been giving yearly scholarships and school items to pupils from R.E.C Regent, Church of Christ, Saio International Academy and Logos Experimental Academy since 2017 to help with their education.

Some of the kids who are receiving aid from Tacugama are also part of the Tacugama Kids Education and Environamental Program (TKEEP).

TKEEP aims to increase sensitization and environmental awareness in primary schools, and give students the life skills to solve the environmental issues of the future.

The programme has been successful in 12 schools around the Western Area Peninsula National Park (WAPNP) and 15 rural schools from Moyamba, Tonkolili and Pujehun districts.

Currently the program involves over 900 students and distributes exciting and comprehensive environmental curricula, while also facilitating hands-on learning experiences for the students.

They prioritise working with rural schools in smaller communities who have traditionally used the forest reserve to support their livelihoods.

Most of the kids who are receiving help from TCS have either lost one or both of their parents to the mudslide. In return for the help given to these kids, they promise to become wildlife ambassadors for TCS. This means that they will tell their families and communities to protect “Babu” (Chimpanzees) and the forest.

It is already known that deforestation was one of the causes of the mudslide. By helping to spread the message of deforestation and environmental degradation, the kids will help protect countless animals and their habitats. This in turn will also protect us from future disasters.

On Tuesday 20th September 2022, TCS Team was at the Church of Christ School at Regent where they distributed school bags, shoes, books and pens to the kids. Their parents/guardians were also given some money to help with their tuition fees.

Kids from the REC Regent School also joined those at Church of Christ to get their packages. Before the kids were given their packages, they played some forest games. TCS Staff also went to Saio International Academy and Logos Experimental Academy to distribute the items to the mudslide-affected kids there.

The kids and their parents/guardians were really happy that TCS is still supporting them.

Reverend Elenorah Jokomie Metzger, the Head Woman of the Regent Village Community started by saying a big thank you to Tacugama for proving the yearly support to the mudslide victims.

Reverend Metzger called on other organizations to emulate Tacugama’s example and help keep these vulnerable kids stay in school. Emma Kargbo, a parent of one of the beneficiaries said she really appreciates the help that Tacugama has been rendering to her child.

This, she said, is because she had nothing to start with this particular school year, and she wasn’t able to afford even a school bag for her child. She also stated that she has been telling her friends and neighbours to stop cutting down trees because trees help to protect their houses from heaving winds and floods.

Jespy M. Munu, a pupil of the Logos Experimental Academy said he is happy to be one of the beneficiaries that Tacugama has been giving educational items and monetary support. He stated that the support has been of great help towards his educational pursuit.

As a wildlife ambassador of Tacugama, Jespy, called on people to help protect the National Animal i.e. the Chimpanzee and its natural habitat. We believe that these kids have a great role to play in order to protect both the animals and their natural habitats.

TCS plans to continue giving support to the mudslide-affected victims because these kids are the future.