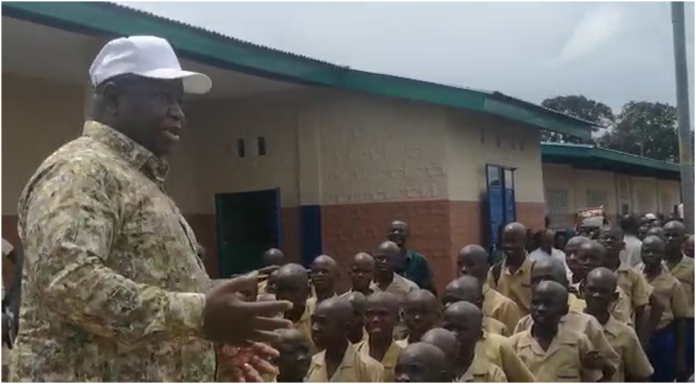 President Julius Maada Bio has encouraged pupils of the Roman Catholic Holy Trinity Primary School at Pujehun to take education seriously and aspire for greatness. The school is where President Bio attained his primary education and wrote the selective entrance examination.

The Roman Catholic Holy Trinity Primary Boys School in Pujehun popularly known as Holy Family Primary School is President Bio’s alma mater. The 6 classrooms structure is where he attended and wrote the Common Entrance Examinations. While recounting his memories of the school, President Bio told the young pupils that decades ago he was just like them, noting because of his craving for success with hard work, he is the President of the republic of Sierra Leone today, something he says they can achieve with determination.

He maintained that education is the most important quest school children must prioritize right now, citing only education can qualify one to become president, medical doctor, lawyer, be rich and attain higher position among others. The president stressed that with education they can be whatever they want to be whiles hoping that his presence inspires the young schoolboys.

President Bio says like him, all pupils in the Holy Family Primary School must aspire for greatness noting he is there as a force of inspiration to the young lads. He advises them to respect and listen to their teachers who are the most important people in shaping the lives of pupils for a better future.

President Bio still remembers the spot in the back of the classroom situated at the end of the building where he sat during his last year in the school before writing the common entrance exam that led him to Bo School where he furthered his secondary education after coming out with an excellent result.

The President in his parting words to the pupils emphasized that Education must be a priority for all Sierra Leonean children.