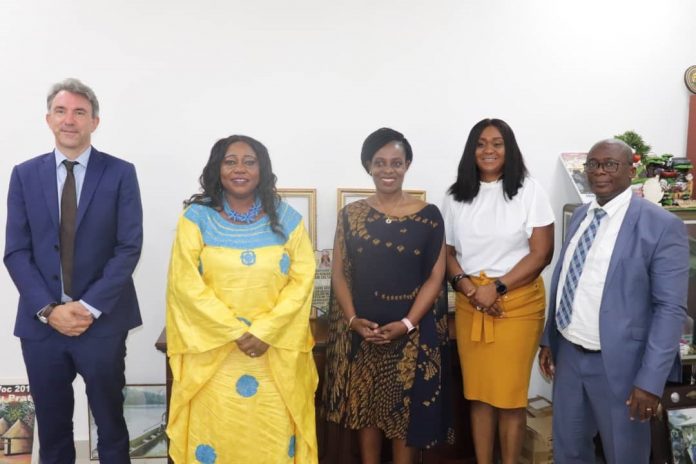 The Enhanced Integrated Framework’s (EIF’s) Deputy Executive Director, Annette Ssemuwemba and its Coordinator, Peter Donelan, have held discussions with the Minister of Tourism and Cultural Affairs, Dr. Memunatu Pratt with regards the various projects under the EIF that are being implemented by the National Tourist Board and the way forward before the EIF closes in 2023.

The team was taken on a tour of the rehabilitation of the 24 bedroom hotel and 6 classrooms of HTTC where they expressed great satisfaction on the level of work done.

The Deputy Executive Director of EIF, Ssemuwemba, started by commending the Minister, the General Manager of the NTB and her team for being very active in the implementation of the various projects under the EIF.

She said this phase of the EIF will finish in June, 2023 but new conversation regarding capacity building of the sector has started and there will be an opportunity for the Minister to advocate for what is most important for Sierra Leone, and her voice will contribute to the design of another initiative, hence tourism remains a priority.

Going through the Sierra Leone portfolio, the Coordinator of the EIF, Peter Donelan, commended the responsiveness and excellence of the technical and monitoring reports from the Tourist Board, which he said have helped them at the headquarter level to get a quick snapshot of details.

He presented a copy of their annual report including inspirational snapshots of their work around the world to the Minister. He maintained that as the EIF draws to a close in 2023, it is important that they show the impact of the projects on people’s lives.

On her part, the Minister of Tourism and Cultural Affairs, Dr. Memunatu Pratt, thanked the EIF team for their support to the sector, saying that they were the first partner she engaged with when she took office in 2018.

She mentioned that she had to revive and make sense of the EIF project because it has been lying in ruins ever since. She said the reconfiguration of the project has helped them in a way that it has targeted critical gaps that they needed to address; for instance, the eco-tourism project in Banana Island, Wara Wara, Tiwai was a lead to the implementation of other projects.

She continued that the EIF project was the eco-solution project she started that engaged the communities. She provided an insight and detailed status on the entire project implemented under the EIF; the team from the EIF was pleased with all the projects implemented by the National Tourist Board.

At the Milton Margai Technical University, Brookfields Campus, the General Manager of the National Tourist Board, Fatmata Hamid Carew, and the Principal of the University, Dr. Phillip Kanu, took the EIF team on a conducted tour of the rehabilitation of the 24 bedroom hotel and 6 classrooms of the Hotel and Tourism Training Centre (HTTC), where they (the EIF) expressed satisfaction with the level of work done and commended sector players for monitoring the project.

Previous article
President Bio Addresses High-Level Dinner Event on Transforming Education
Next article
“Not to Spend on Education, is the mistake any country can dare to make” -Minister Sengeh tells the BBC
AYV News