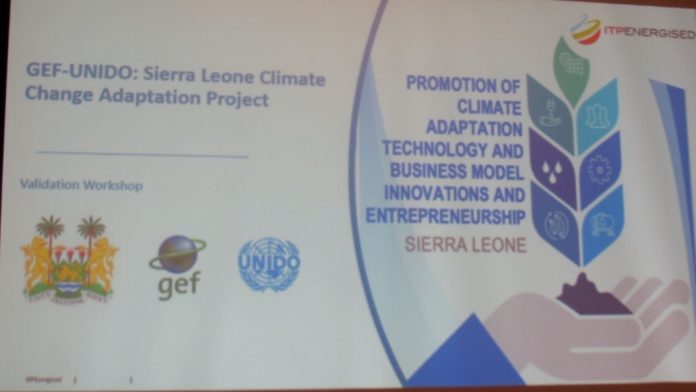 She said it will further reduce exposure to the impacts of climate change and the proposed interventions will be in two folds – effect of making vulnerable communities resilient to climate change and boosting economic growth and innovation for Micro, Small and Medium Enterprises (MSME).

Madam Swaray went on that the objective of the project is to increase resilience of vulnerable populations by supporting MSME-driven innovation, transfer and large-scale development of adaptation technologies, products and services in the water, agriculture and energy sectors in Sierra Leone.

According to her, the project is structured in 5 components – Strengthening institutional and frameworks of adaptation; Scaling up support for adaptation and financing access for vulnerable groups to acquire adaptation technologies among others.

As part of the benefits of the project, it will remove barriers to MSMEs development by improving the business environment for climate adaptation innovation and will create an integrated mechanism to develop and deploy innovation technologies.

She thanked the Government of Sierra Leone for the long-standing collaboration and continued support offered to develop the GEF 7 cycle in the country.

“It is my pleasure to report that to date UNIDO and its partners have collaborated on the implementation of seven projects in the country within areas of trade, capacity development, energy and environment, job creation and climate change,” she told participants.

Swaray also mentioned that UNIDO and its partners seek to leverage the results obtained from the set of past climate change adaptation projects to support Sierra Leone in its goal to build a climate resilient economy.

“As you are aware, the private sector plays a key role in the economy and the climate change adaptation market and acts as an innovation catalyst. However, MSMEs still face several barriers that halt access to unlock innovation potential and address shocks and recover from them with reduced costs,” she revealed.

She said while challenges persist, they also provide a window of opportunity for change. Adding: “UNIDO is aware that promoting climate resilient does not only address vulnerability, it also offers an opportunity for growth to local entrepreneurs and vulnerable communities.”

She went on to state that as a specialised UN agency, UNIDO supports countries pursue inclusive and sustainable industrial development (ISID), adding that it comes with extensive expertise in the area of climate innovation and entrepreneurship through partnership building and resource mobilisation.

Director at Environmental Protection Agency (EPA), Sheku Kallay urged that the project, at the end of its implementation creates the right impact.

Kallay added that climate change is not just about impact or mitigation, but also how to build the resilient of a nation to be able to cope with the impact of climate change.

“If we want to move forward as a nation, we must ensure that climate impact and livelihood interventions are linked,” he opined.

He also stressed the need for collaboration and monitoring mechanism in the project.

In a PowerPoint presentation, Chief Climate Technology and Innovations Division Department of Energy, UNIDO -Alois Posekufa Mhlanga said the climate rationale behind the project is in line with the strategic vision shared by UNIDO and GEF.

He talked on the role of the private sector, the cutting-edge solutions offered by adaptation technologies and the presentation of the project management structure.