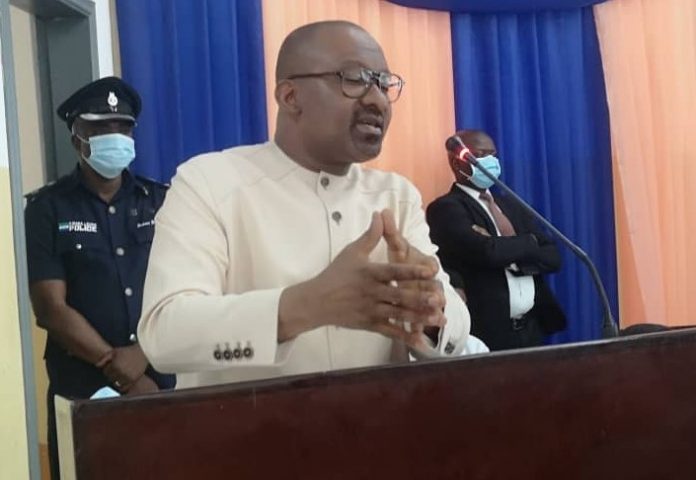 Vice President of Sierra Leone Dr Mohamed Juldeh Jalloh has attended the opening of the 10th Africa Conference on Sexual and Health Rights (ACSHR) at the Bintumani Conference Center in Freetown.

The Conference was organised by Purposeful Production that brought together representatives from over forty Africa countries including the Vice President of Liberia Madam Jewel Howard Taylor and other parts of the world.

In his address, the vice president called on Africa Governments to address vulnerabilities around women, stressing that Governments in Africa must take bold step to empower women and keep them out of fragility.

Vice President Jalloh explained progress made by government in terms of policy and action on Sexual and Gender Based Violence (SGBV). He narrated that some of the critical actions taken by government range from legal and policy reforms, institutional strengthening, strengthening of the justice system, improve care and support for survivors of Sexual and Gender Based Violence.

Vice President Jalloh informed the representatives about the 2019 National Emergency Declaration on rape, SGBV by President Julius Maada Bio, adding that the President Declaration demonstrates his zero tolerance on Gender Based Violence (GBV).

He further highlighted the amendment of the 2019 Sexual Offenses Act that increase penalty for rape from fifteen years to life imprisonment; the establishment of One-Stop-Center in eight districts to support survivors of rape and GBV related cases; the establishment of sexual offenses court to expedite trial of rape cases in a survivor friendly manner; the Radical Inclusion Policy that ensures pregnant girls stay in school; adoption of Male Involvement Strategy that position and empower men as Change Makers in the fight against SGBV, and the reduction in knowledge gap on GBV in Sierra Leone through the Hands Off Our Girls Campaign led by the First Lady Fatima Bio.

He noted that the interventions taken by the Government of Sierra Leone indicate progress made in the fight to eliminate GBV.

Dr Jalloh further explained that the key challenge in the Gender Based Violence fight is the commitment to invest in maternal health and improve in the socio-economic wellbeing of women.

He nonetheless dilated on the progressive increase in health budget from 6% in 2018 to 11.7% in 2022 despite short of the Abuja Declaration which states 15% budgetary allocation to the health sector by African countries; the recruitment of five thousand health care workers, and the provision of ambulances for pregnant women to have vehicle access and deliver safely.

The vice president explained that the reason for the specific budget on nutrition is because government is aware of the fact that the first one thousand days from pregnancy to delivery of child is crucial.

He explained that the tendency for a malnourish pregnantwoman to deliver safely is a challenge.

Liberia Vice President Madam Jewel Howard Taylor recalled the inability of women to boldly speak on SGBV and Female Genital Mutilation (FGM) over twenty years ago, describing the conference as an opportunity to look at some of the gaps as Africans and design the way forward.

She called on Africa Governments to address Sexual and Gender Based Violence, child marriage, and Female Genital Mutilation that affect women and girls. She expressed sadness on the experience women get from Gender Based violence, even though women formed 50% of the world population. Vice President Taylor expressed hope for a roadmap that will take Africa out of GBV at the end of the conference. She thanked partners for their commitments in the fight against SGBV, and for trying their best to increase investment to find the root causes of Gender Based Violence.

The United Nations Resident Coordinator in Sierra Leone-DrBabatundi Ahonsi stated that SGBV are critical to the social and economic progress of Africa. He expressed hope that the conference provides stakeholders the opportunity to renew their commitment to Sustainable Development Goal (SDG-5). He explained that SDG-5 is about achieving gender equality and empowering women and girls.

The theme of the conference; Accelerating the Elimination of Sexual and Gender Based Violence in Africa, Dr Ahonsi noted is a call to action to all stakeholders to reinvigorate their efforts to ensure the elimination of SGBV. Elimination he said requires collective action by all including youth, civil society organizations, Governments and others. He encouraged Africans to build strong partnership and mobilise resources, provide innovative and sustainable solution to address SGBV.