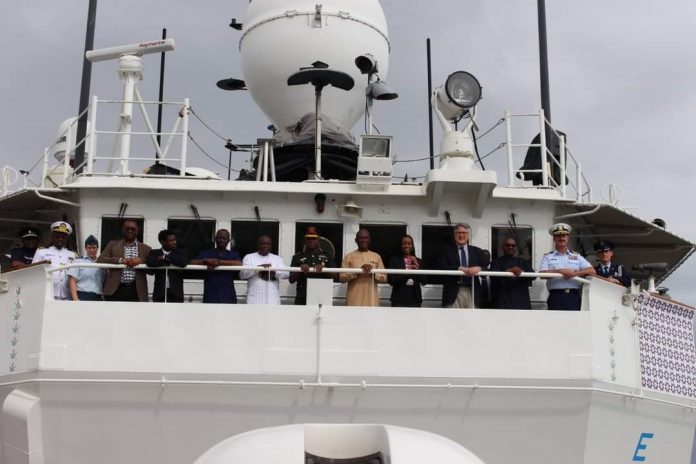 The Vice President Dr Mohamed Juldeh Jalloh has toured the United States Mohawk Ship (WMEC 913) which is presently on the shore of Sierra Leone. Vice President Jalloh stated that he and other Government officials were on board the ship on the invitation of the Commander, stating that the United States (US) coast guard is in Sierra Leone on a mission, because of the collaboration between the US Government and the Government of Sierra Leone to support and build the capabilities of marine institutions to police the coast. He furthered that the coast guard vessel will be working closely with the Republic of Sierra Leone Armed Forces, marine department, Ministry of Fishery and Marine Resources to build their capabilities.

Dr Jalloh described the coast guard ship as one that has defense and rescue capabilities. He therefore maintained that the ship is in Sierra Leone to work and support build the capability of the marine sector to police the coast and fight unregulated and illegal fishing.

Vice President Jalloh expressed optimism that through collaboration with the US, the crew will help the marine sector with knowledge base on policing and modern techniques. He described his tour as worthwhile and comprehensive.

David Renner-the United States Ambassador to Sierra Leone said that there is a strong bilateral relationship between the two countries, noting that the arrival of the coast guard is a tangible example of the strength and cooperation. He stated that the US coast guard has been involved in protecting the coastline of the United States since 1790. He informed about the work done by the coast guard including search and rescue, prevention of drug entry and illegal fishing. Ambassador Renner concluded that the crew has expertise, and Sierra Leone stands to benefit from the US coast guard expertise.

Dr Abdulai Fofana, General Manager of the Sierra Leone Port Authority informed that the coast guard ship is visiting Sierra Leone after twenty-five years. He expressed happiness for the visit of the ship, noting that the visit shows the port is safe for business.

The USCGC Mohawk is in Sierra Leone for few days. The crew of the vessel will partner with the Sierra Leone Maritime on joint operations at sea. The operations are part of the United States and Sierra Leone Governments training to support their common goals to ensure safety, security and navigation at sea.