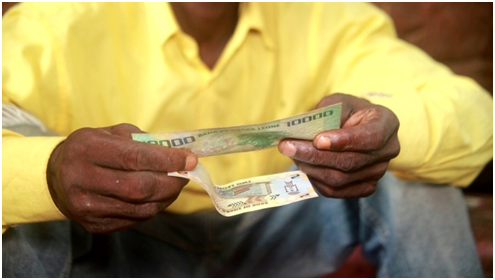 Visually impaired persons across the country have expressed disappointment over what they referred as them ‘being left out of the sensitisation process on the use of the New Leones’.

Some visually impaired persons who spoke to this reporter said they are faced with several challenges in understanding and transacting business using the New Leones.

They said they feel neglected and disenfranchised in the use of the new currency, adding that one of their major challenges is on identifying and understanding the new currency.

This they believe owns to lack of proper sensitisation by the powers that be, especially the Bank of Sierra Leone.

He added that during the launch of the redenomination of the leones on 1st July, 2022, President Julius Maada Bio advised that the new leones must be well sensitised to the public.

However, he went on, a period of almost a month has gone-by and nothing is done to engage them the visually impaired on the new Leone.

Another visually impaired beggar at Cotton Tree Central Freetown, Emmanuel Conteh said he can only identify the new notes based on its size (breathe and length wise).

He said: “I know the two leones note is larger and longer than the one leone note. So I can only identify them by their size.”

Arnold Hallowell, working for Counter Odds Sierra Leone, an organisation working on visually impaired issues, said: “The challenge some of us face in identifying the new notes is a discrimination against us and this is against an agreement signed by the Bank to enhancing inclusivity in all they do”.