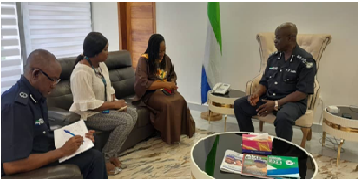 He made the statement while commenting on a proposed barrier assessment survey by the UN Women for female Police officers in the SLP.

According to IGP Sellu, the SLP has a whole Directorate responsible for gender issues and policies.

Government, he said now offers scholarships to the female officers and study leave to encourage them build on their capacities.

He however, raises concern over what he refers to as the lackadaisicalness of female officers in taking up tasks that would build or improve on their capacities.

“We have good gender policies and we keep on asking them to make themselves relevant” he said.

He therefore welcomed the assessment and expressed optimism that it would help inspire female officers to take up challenges. He pledges full support to the process.

Earlier, Madam Setcheme Jeronime M. Mongbo disclosed that what they are working towards in the barrier assessment is to do something better in strengthening women and build their capacities especially for peace keeping missions.

The assessment she said has been conducted in the Republic of Sierra Leone Armed Forces (RSLAF) and that they are now looking at the police.