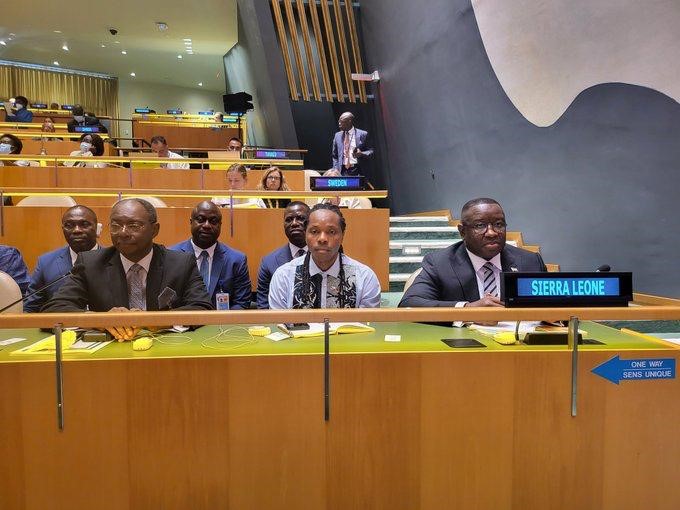 President Julius Maada Bio has stated that Sierra Leone has been aggressively transforming its education sector since 2018, the country has done so in order to address questions around access, inclusion, quality, retention, completion, and transition to technical, vocational, and higher education.

He made this statement yesterday 19th September, 2022 during the scene-setting session of the Transforming Education Summit, in New York during the United Nation General Assembly.

“Improving educational outcomes in a country where there had been underinvestment in education and failing standards was clearly a challenge. School infrastructure, curriculum, policies, and governance had to be urgently addressed. Girls, pregnant girls, poorer learners, learners in rural areas, learners with disabilities had unequal access to the education that was on offer. Learners had uneven access to foundational learning, food, teaching and learning materials, WASH facilities, trained teachers, and more. More importantly, we did not have enough money to undertake the necessary reforms we had envisioned,” President Bio said.

According to the President, because of a strong political will and a commitment of Sierra Leoneans people, four years later, Sierra Leone has increased enrolment across board by more than one million additional learners, adding that Sierra Leone has achieved gender parity in enrolment and revamped the curricula at all levels to include critical thinking, comprehension, computational thinking, creativity and civic education.

He said girls studying Science Technology Engineering and Mathematics (STEM) subjects can be educated from primary through university tuition-free, noting that pregnant girls can once again go to school, and Sierra Leone is supporting learners with disabilities with specialised teaching and learning materials.

“These are but a sample of the achievements we are proud to share as a nation. How did Sierra Leone do it? We focused on goals, investment and inclusive and innovative strategies. Firstly, we were clear that our goal was to make education our main vehicle for national development,” he said.

According to President Bio, by making basic and secondary education free, a message was sent to every Sierra Leonean that they, too, deserved to be included, emphasizing that education is not a luxury; but a right.

He said Sierra Leone raised domestic investment, by raising education’s share of the domestic budget to 20% – schools fees and exam fees are now a thing of the past in his government-supported schools, the expansion of school feeding and hired thousands of new teachers, and increased their salaries even during COVID.

He said Sierra Leone innovative policies and technology tools are always with a view to improve inclusion and access, adding that Sierra Leone adopted the Radical Inclusion policy to deliberately support those most at-risk of not reaping the benefits of an education.

“We hosted the 14 countries that signed the Freetown Manifesto to make a commitment to Gender Transformative Leadership in and through education. But we are only getting started because I believe that SDG 4 is essential to achieving all other SDGs. We stand ready to work with partners to continue to develop this vision and improve education outcomes in Sierra Leone,” he said.

He said the SDG4 High-Level Steering Committee which he Co-Chairs and the Summit Advisory Committee have been paramount in this regard, noting that he met with various stakeholders, including school children, in preparation for this summit.

“Today, Sierra Leone commits to cutting in half the number of out-of-school children of primary school age by 2030, compared to today. We will launch an Alliance for Foundational Learning through which we further commit to cutting the rate of learning poverty in half or more by 2030. We commit to preparing our students for the future by making climate education a central component at all levels. Today, Sierra Leone also commits to setting measurable targets for skills training and technical education. We must support all young people to become nation builders,” he said.