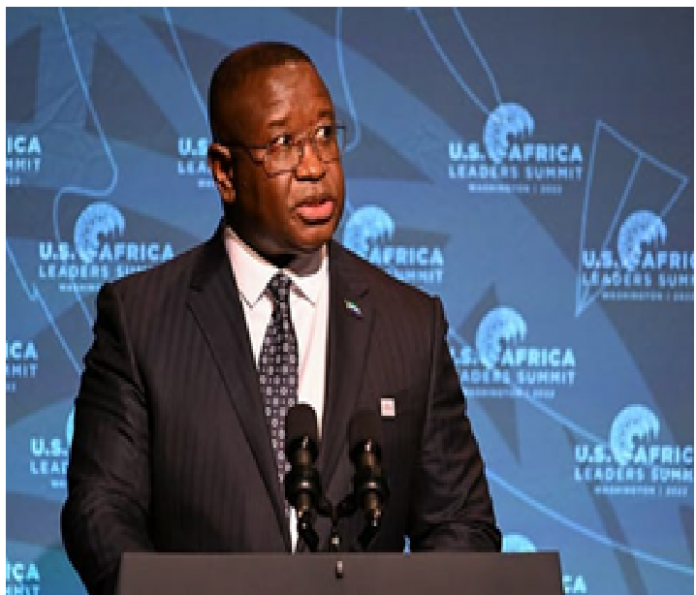 By Amadu Lamrana Bah in Washington

President Julius Maada Bio has on behalf of other African Leaders who attended the U.S.-Africa Leaders Summit, said Africa has quite a lot of debt which has become a burden, affecting investment in social services and a threat to democracy, stressing they need relief to be able to breath as governments.

Speaking to this writer, the President said Africa is saying to the U.S. government and the world that the African continent is becoming helpless in the ongoing global tragedy that has slowed growth and economic activities.

“Every month that we get revenue, instead of attending to the social needs of the people [health and education], we use huge amount of what we gather to take care of our debt burden,” he said.

In 2015, Sierra Leone was hit by twin shocks of Ebola and fall in iron ore prices which made the economy to contract by 15.5%. In 2020, the country was also hit by the COVID-19 pandemic which saw a negative growth of 2.2%.

The country’s total debt stock as of the end of 2021 is more than the entire government budget for 2019, 2020, 2021 and 2022 and the implication is that the public debt of Sierra Leone is already exposed to a high risk of debt distress for which sound actions should be pursued to make it sustainable, according to the Budget Advocacy Coalition which comprises Budget Advocacy Network, ActionAid, Christian Aid and Oxfam.

President Bio went further to state that after paying salaries, government is left with little to take care of other programs. The debt, he said, has reduced the country’s fiscal margin with over eight percent of the country’s revenue generated to debt financing and only about 15% is left to invest in social services.

“We have taken every measure available to us but the Leone cannot still appreciate with the Dollar, and that makes my government appears to the people as if they are not handling the economy very well. But we are so helpless in the face of this global tragedy,” the President added.

On the current economic situation in the country, President Bio informed that the country is going through extraordinary difficult times and therefore, the people need to be comforted to be able to cater for their food, health and take care of their children who are in school.

He accepted that the situation is tough and not that his government hasn’t done enough as they have taken every measure available but they still cannot match the Dollar which is rising against all other major currencies; the reason they are asking the U.S. government and other countries for debt relief.

“If they can give us debt relief, we are even proposing in Sierra Leone that whatever we get from that, we will use not on infrastructure or other things but to take care of the needs of the people”, he assured.

Meanwhile, the Sierra Leone Debt Coalition have registered their support of the call of the President for debt relief for African nations especially for countries like Sierra Leone that has received several shocks (Ebola, Mudslide, COVID-19 and the ongoing Russia-Ukraine war).

On attending the U.S.-Africa Leaders Summit, President Bio said although people say he travels a lot, he however needed to be in Washington D.C in the cold winter season to honor the invitation of President Biden and join other African Leaders in putting the continent’s common agenda to the fore.

He continued that the meetings at the Summit have been very productive and both sides have realized that the relations between the United States and countries in Africa need to be strengthen for the mutual benefits of their people.

“I think we have a lot of reasons to be optimistic and it was done in a very good atmosphere of frankness and African Leaders were given the opportunity to say what they think about the state of the relationship and how we can better that relationship for the mutual benefit of our people”, President Bio noted.

The President assured that his government will set up a team that will work with the U.S. Agencies to follow up on how to tap into the US$15 billion announced by President Biden during the Summit as new support to the African continent.

Speaking on the Millennium Challenge Corporation (MCC) Compact Funding support that is expected to be announced next year, the President said he is very optimistic that Sierra Leone will have the grant from the U.S. government as they are already working on the administrative processes for the implementation and there is a satisfactory progress which was also confirmed during his meeting with the MCC CEO, Alice Albright.

“That money is already ours and we are making sure that it lands in a very comfortable zone and used for the benefit of the average Sierra Leonean”, he said confidently with a broad smile.