We shall live by the law” …EC-SL Chief Commissioner assures

We shall live by the law” …EC-SL Chief Commissioner assures 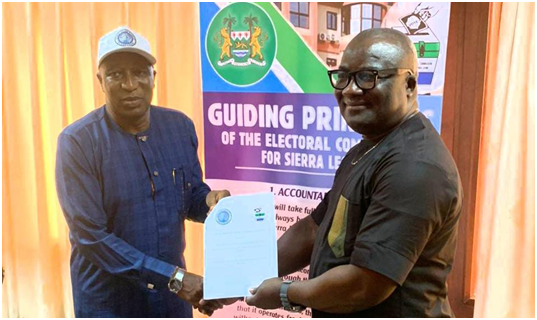 He was speaking during an engagement with journalists on the phase one of the voter registration process which ended on 17th September 2022.

The Chief Commissioner assured that the institution is responsible for conducting free and fair elections nationwide and that they shall make sure they live by the dictates of the law with no political party dictating to them what they should do or not.

He went on to confess that there were some challenges on the ground but that with his team of competent commissioners, staff and stakeholders on board, most were handled amicably.

He said: “We had challenges during our training exercises and the August 10 protests would have been a threshold for the registration process to be postponed but we thank God that we maintained the stipulated start-up date which was 3rd September 20222. We have been able to deploy our staff members to their various centres for the commencement of phase two of the registration process, from Tuesday 20th September to Tuesday 4th October 2022”.

Commissioner Konneh further updated the fourth estate and told them that the news making rounds on social media that the EU has given 10 million dollars to the Commission is not true and it is a mere tale against their institution.