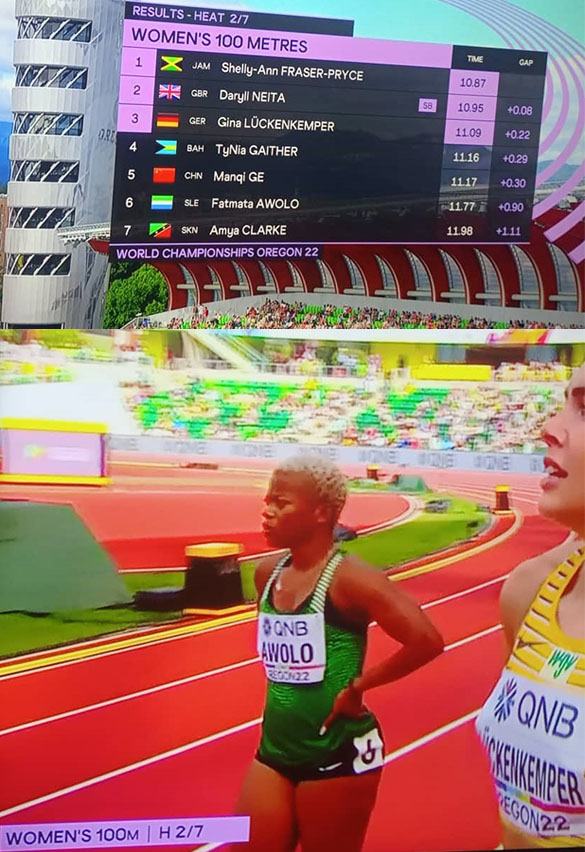 The event was snatched by Jamaican favorite Shelly-Ann Fraser-Pryce with 10.87 seconds to reach the semi-final. Awolo’s performance among those World class Athletes was considered much better as she breaks her personal best. Let have the highlights

The United States base female sprinter Fatmata Awolo had a personal best records of 11.46 seconds on the Texas Tech Corky Competition where she ended up in the first place on 30th April 2022.

The 22 years old Fatmata Awolo has represented Sierra Leone for the first time in the World Athletics Championship in 2022. She competed in the heat two women’s 100 meters clocking 11.77 seconds out of seven world class athletes. Awolo’s performance has shown her improvement as an Athlete for Sierra Leone even though she couldn’t qualify to semi-final of the 2022 Oregon, World Athletics Championship

Fatamat Awolo is hailed from Kambia, North of Sierra Leone in April this year smashed former Athlete Maggie Barrie’s record in the 100 meters to become the female fastest Athlete in Sierra Leone with 11.34 seconds at the Sam Johnson Invitation Texas United States. She has been highly regarded as the new queen in the track following her remarkable performance in recent time. Saturday 17th July 2022 on the Africa Young Voices Sports Programme, the Chief of Mission known as Chef de Mission for the National Olympic Committee of Sierra Leone Unisa Deen Kargbo confirmed that sprinter Fatmata Awolo will not be representing Sierra Leone in the 28th July to the 8th August Commonwealth Games in Birmingham, London due to an incomplete document