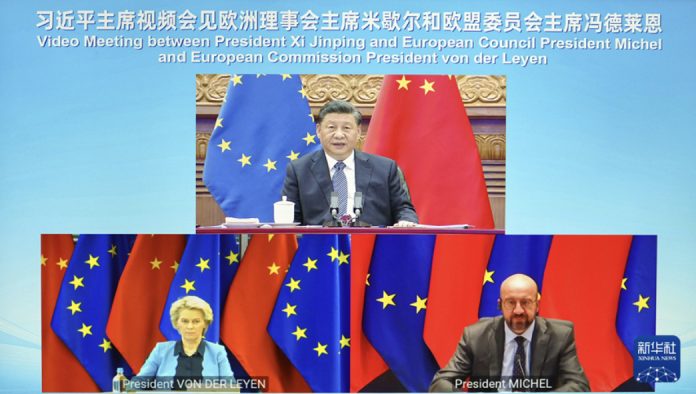 Chinese President Xi Jinping said on Friday that China and the European Union (EU) should bring more stability to a world plagued by a protracted COVID-19 pandemic, a faltering global recovery and the ongoing Ukraine crisis.

With two major forces, markets and civilizations, China and the EU should enhance communication on bilateral relations and issues concerning global peace and development, Xi said, calling on the two sides to play a constructive role in adding stabilizing factors to a turbulent world.

He said China and the EU share extensive common interests and a solid foundation for cooperation. Only through cooperation and coordination can the two sides resolve problems and rise to challenges, he added.

Underscoring the consistency and continuity of China’s EU policy, he urged the EU to form its own perception of China, adopt an independent China policy, and work with China for the steady and sustainable growth of bilateral ties. We.

China and the EU should take the lead in upholding the international system with the United Nations at its core, the international order underpinned by international law and the basic norms governing international relations based on the UN Charter, Xi said. The two sides should jointly reject the resurrection of rival-bloc mentality and oppose attempts to start a new Cold War, he added.

He called on the two sides to jointly promote common development and economic globalization. China will unswervingly deepen reform and expand openness, he pledged, adding that China welcomes European companies to invest and do business in the country. He also called on the EU to provide a fair, transparent and non-discriminatory business environment for Chinese companies.

Michel and von der Leyen said China is an important force in the world and that the EU attaches great importance to its relations with China. They said the EU and China enjoy a longstanding relationship of mutual benefit, and that both sides are committed to defending peace and multilateralism. They reaffirmed the EU’s commitment to the one-China principle.

The EU is willing to deepen cooperation with China in fields such as economy and trade, investment, energy and green development and to jointly address global challenges including COVID-19, climate change and the protection of biodiversity, they said.

Xi and the EU leaders also exchanged views on the situation in Ukraine.

China finds it “deeply regrettable” that the situation in Ukraine has come to where it is today, Xi said.

China is always on the side of peace and makes a conclusion independently based on the merits of each matter, he said. China advocates upholding international law and universally recognized norms governing international relations, and adheres to the UN Charter and promotes the vision of common, comprehensive, cooperative and sustainable security, he added.

He outlined four key points on resolving the crisis under the current circumstances. Efforts should be made to promote peace talks, prevent a larger-scale humanitarian crisis, build lasting peace in Europe and on the Eurasian continent, and prevent the regional conflict from magnifying.

China supports the EU’s efforts toward a political settlement of the Ukraine issue, and has been encouraging peace talks in its own way, he said.

Xi urged the international community to create favorable conditions and environments for the negotiations between Russia and Ukraine and make room for political settlement, rather than “add fuel to the fire” and heighten tensions.

The root cause of the crisis is the regional security tensions in Europe that have built up over the years, and a fundamental solution is to accommodate the legitimate security concerns of all relevant parties, he stressed, adding that global and regional security frameworks should no longer be built with a Cold War mentality.

China supports Europe, especially the EU, in playing a primary role, and supports Europe, Russia, the United States and NATO in holding dialogue to face up to the tensions that have built up over the years and find solutions, so as to build a balanced, effective and sustainable security framework in Europe, he said.

Xi also warned about the conflict’s potential impacts on the world economic system. Relevant parties “must not let the global economic system be disrupted at will, still less allow attempts to politicize or weaponize the world economy as a tool to serve one’s own agenda,” he said, warning that such attempts will trigger serious crises in global finance, trade, energy, technology, food, industrial and supply chains.

China and the EU need to commit themselves to keeping the situation under control, preventing a spillover of the crisis, and, most importantly, keeping the system, rules and foundation of the world economy stable, in order to bolster public confidence, he said.

Chinese Vice Foreign Minister Deng Li said on Friday night that the summit has sent positive signals to the world.

In an interview with China Media Group (CMG), Deng said China and the EU should work together to safeguard world peace, promote common development and push forward human civilization. The two sides agreed to coordinate on de-escalating the conflict in Ukraine, he noted.