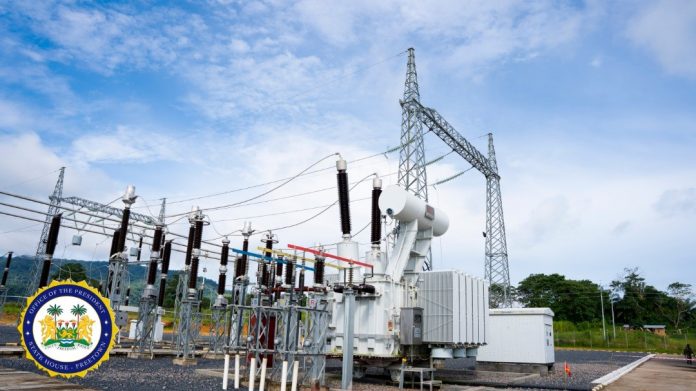 “Today, I am pleased to switch electricity on for Koidu Town –Tankoro, Gbense. I expect that my people in Kono would put the electricity to productive use and generate income. Electricity will also support other sectors – healthcare, education, and public services.

“My government is working with the African Development Bank to connect the following towns to the CLSG grid: Nimikoro, Ngaia; Nimikoro, Yengema; Nimikoro, Motema.

The landmark cross-border Interconnector Project involves the construction of a transmission line of over 1,300km, aiming to interconnect Côte d’Ivoire, Liberia, Sierra Leone and Guinea, the CLSG countries’ energy systems, into the WAPP regional energy network.

President Bio also noted that when he last visited the diamond-rich district, the people of Kono had advocated for electricity and that he had promised them he would be back, adding that he was back with also the rural renewable energy projects to provide power to community health centres, operational in seven towns.

“We have this facility in Fiama Jagwema, Gbane Gandorhun, Gbane Kandor Kaodu, Kamara Tombodu, Lei Kombayendeh, Sandor Kayima, Soa Kainkordu. We are also prioritising electricity for the mining companies in order to reduce production costs and boost profitability. By October or November Octea Mining will be connected, with pending connections in advanced negotiations for Meyah Mining and Wongoh Investments,” he said.

Minister of Energy, Alhaji Kanja Sesay, disclosed that President Maada Bio had provided 5000 meters free of charge for the people of Kono, adding that that was to increase access to electricity for people in the district. He, however, cautioned that electricity, the world over, was not free of charge and that they would have to buy EDSA credits to be able to enjoy sustainable power.

“When we started fixing the poles, some people were doubting us, saying it’s a camouflage to the people. We were working hard and didn’t allow any distractions. today we are switching on 24 hours electricity,” Minister Kanja said and encouraged Kono people to own the project and avoid electricity theft and destruction of installations.

Resident Minister East, Hon. KES Boyah, and Minister of Local Government and Rural Development, Tamba Lamina, also thanked the President and Minster of Energy because the commissioning was another history-making event for the people of Kono.

Paramount Chief Tamba Foyoh of Soa Chiefdom said they have been yearning for such an opportunity as President Bio’s good work will be remembered by the people of Kono district.