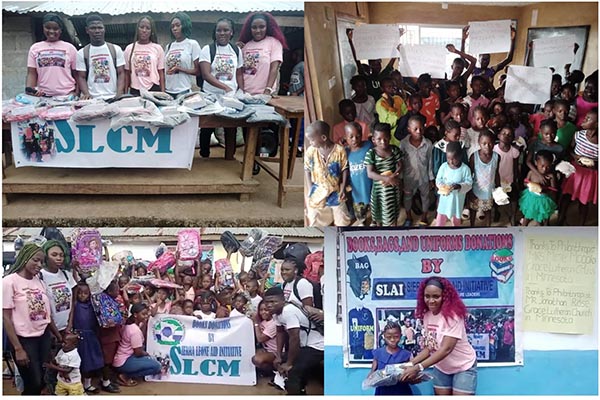 SLAI, according to the Country Director in Sierra Leone, Theresa Rose, is an organisation based in the United States of America, with operations in Sierra Leone.

She said the support is for SLAI to give back to deprived communities, especially to less privileged children and to further boost government’s free quality education drive.

She said the gesture targeted pupils whose parents are financially challenged to meet their children’s school expenses.

She said the brain behind the support is a philanthropist based in Minnesota, USA named Jonathan Rose, with support from the Grace Lutheran Church in Minnesota.

Madam Rose went on that the support is a yearly supports started years back and that the donors have assured their commitment to continue their supports until less privileged pupils, especially the orphans, have good quality education as the privileged.

She assured that SLAI with more supports from Grace Lutheran Church will continue its supports to the less privileged.

Similarly, the gesture was extended to Network for Children in Need Orphanage Home at Furniture in Allen Town, where uniforms, school bags, assorted school books, food items including bags of rice, soft drinks, cooking condiments among other things were supplied.

Director for the Network for Children in Need Orphanage Home, Madam Inna Maria Kamara thanked the donors in the USA and home for considering her children for the support.

She made a humble appeal to the U.S. based donors to continue the support, confessing that it has not been easy to take care of the children in the orphanage.

She said currently, they are challenged with feeding and wears for the children, classroom furniture and more importantly, money to pay salaries to the teachers employed to be teaching the children in the Home.

Madam Kamara with emotions and tears begged Jonathan Rose and members of the Grace Lutheran Church in Minnesota to consider helping her more.

Similar appeals were made by pupils, orphans, teachers and heads of the schools that benefitted from this year’s donation, while asking God to bless and reward the donors.