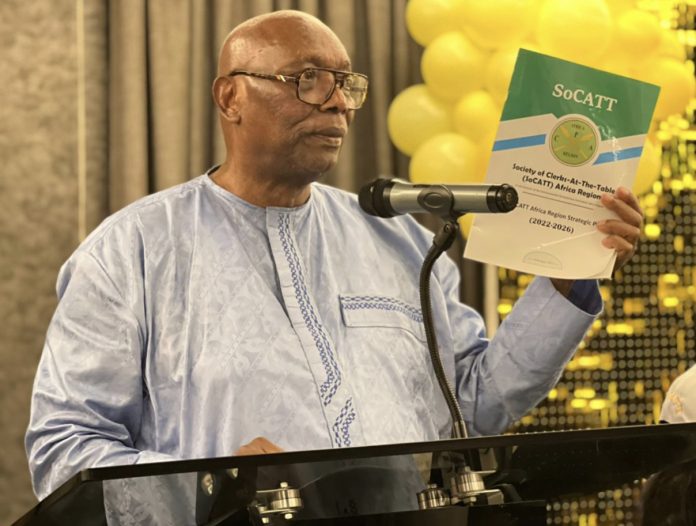 The Speaker of the Sierra Leone Parliament, Hon. Dr. AbassChernor Bundu,  and President of the Commonwealth Parliament Association (CPA) Africa Region, has officially launched the 2022/2026  Strategic Plan for the Society of Clerks-at-the-Table (SoCATT), at  Lagoonda Hotel, Aberdeen in Freetown.

SoCATT is an affiliate body of the CPA Africa Region and works under the purview of the latter. The Strategic Plan is a working document with planned activities that should be undertaken by SoCATT in light of achieving its set goals and objectives.

In her welcome remarks, the Director-General of the Parliament of Sierra Leone, Mrs Finda Fraser on behalf of the Clerk of Parliament, Hon. Paran Umar Tarawally expressed appreciation to the delegates and also used the occasion to thank the leadership for her recruitment. She spoke about SoCATT and its mandates in respect of service delivery and support services to the CPA Africa Region.

She told her audience that, the tenure of the current Clerk had witnessed a tremendous transformation, in light of law making, collaboration, coordination, dialogue, institutional and staff capacity building.

The Director-General said the conduct of the CPA Conference in Sierra Leone is very important and expressed hope for a positive outcome in light of deliberations.

Joseph Machaka, a member of the Steering Committee spoke on behalf of the Chairperson of SoCATT Africa Region, Ambassador Jeanine Kambanda. He said they were delighted to be part of the conference and went on to commend CPA and SoCATT.

He spoke about the core values, mandate, and activities of SoCATT, in light of the efforts of the Steering Committee.  He underscored the agenda, purpose, importance, and objective of the strategic plan. He also used the platform to identify critical issues and key challenges and went on to appeal to the Speakers of the various Parliaments to support SoCATT to implement its strategic plan.

Delivering a goodwill message, the Minister of Planning and Economic Development, Dr. Francis Kaikai, on behalf of the Government of Sierra Leone welcomed all the delegates and extended thanks for attending the conference. He acknowledged the efforts of the Clerk of Parliament for his dynamic leadership and excellent service. “I am very happy to be here to give a tribute to SoCATT”, he stated. According to him, President Bio attached so much importance to planning and recalled how the Ministry was created by the President. He expressed hope for SoCATT and went on to make a strong commitment, relative to the implementation of the document.

The Speaker of ECOWAS Parliament, Hon. Sidie Mohamed Tunis whilst giving a goodwill message expressed happiness on behalf of ECOWAS and extended thanks to all for their participation. He wished them a fruitful deliberation and used the occasion to extend good wishes to Her Majesty the Queen of England for her care and support towards the survival of the Commonwealth of Nations. He lauded the efforts of SoCATT and spoke about the role of Parliaments and the support of Clerks in service delivery. He also expressed hope that the Strategic Plan would help in the day-to-day operations of SoCATT.

The Speaker used the occasion to speak about the nature of the jobs of the Clerks in parliamentary service.

In his Keynote address, the Speaker of Parliament, who also doubles as President CPA Africa Region,

said during the launch of the document that it would serve as a roadmap and went on to recall the establishment and purpose of SoCATT, in light of effective and efficient service delivery. According to him, it was time to enhance the mandate of SoCATT and informed that it was necessary to share experience among their membership. He said it was expected of the document to serve as a catalyst for a more coordinated approach towards the implementation of the Strategic Plan of SoCATT. He anticipated that the plan would set out a growing part and would set the necessary platform.

The launching of the document by the Speaker and awards in recognition of good services to SoCATT climaxed the ceremony.

Sheku Lamin Turay, Director of Parliamentary and Public Relations Department, Parliament of Sierra Leone mastered the ceremony and Speakers of national and subnational legislatures of CPA Africa Region, members of SoCATT, the Leadership and Staff of Parliament were in attendance.