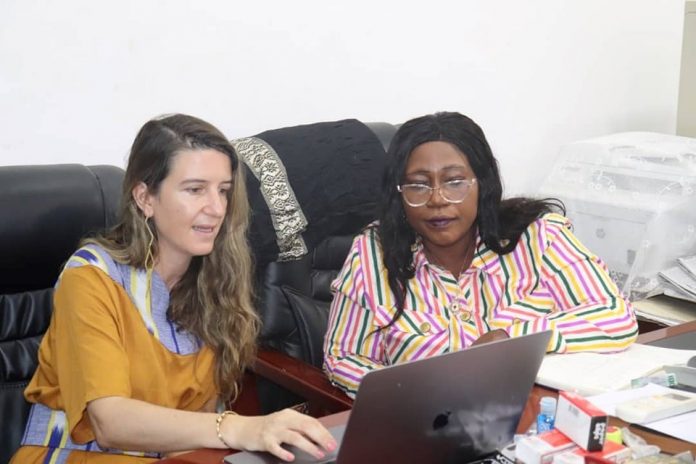 Stephen Battle and Aziza Chaouni, the Project Manager for the World Monuments Fund and the Architectural Consultant respectively, have presented findings on the first phase of the preservation of Old Fourah Bay College to the Minister of Tourism and Cultural Affairs, Dr. Memunatu Pratt at the Ministry of Tourism on Kingharmann Road in  Freetown.

World Monuments Fund is the implementing partner for the United States Ambassador’s Fund for Cultural Preservation grant that was awarded in 2021 to preserve Old Fourah Bay College. The grant will cover the first phase of what will be a multi-phase project.

The scope of the first grant was to prepare a comprehensive analysis of the current state of the structure, carry out limited emergency stabilization to prevent further damage and develop a plan for reuse of the structure in consultation with the community and key stakeholders.

Presenting their findings, the Architectural Consultant, Aziza Chaouni started by showing the Minister the different phases of the project. She said the first phase was covering the architectural design and emergency measures, once that is done they will seek from the US Ambassador to fund the rehabilitation, she said. She assured that they will be done with the first phase by the end of October, 2022.

On her part, the Minister of Tourism and Cultural Affairs, Dr. Memunatu Pratt said the project is on course and was impressed by the amount of work done on the edifice thus far considering how it was and how she was seeing it on paper.

She stated that the restoration of old FBC will be an educational and recreational opportunity for not only Sierra Leoneans but for international tourists. She added that the monumental edifice will be multi-purpose and multi-dimensional in a way that it will have an education museum for Sierra Leone, digital library facilities and part of the building will be used for income generation.