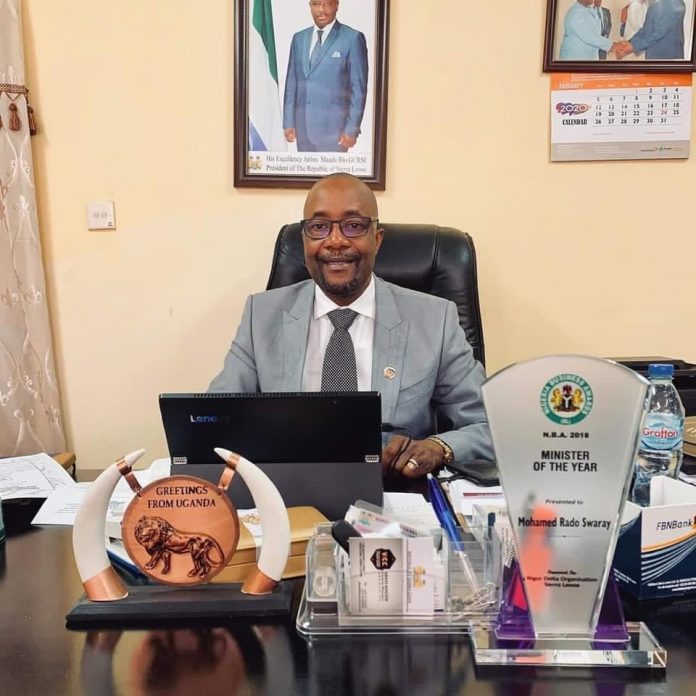 Government of Sierra Leone, through the Minister of Information and Communications, Mohamed Swaray,has urged all recipients of Doctor of Philosophy (PhD) and other degrees from the Dominion Christian University and the African Graduate University (AGU) to renounce them forthwith.

He was speaking in a radio interview yesterday 19th April, 2022 when he said the New Direction Government is a Human Capital Development and this means the government is very committed to quality education and that is why when President Julius MaadaBio was voted into governance in April 2018, by September the same year he launched his free quality education school program.

This, he said means the government want to use education for national development. So that is why government has strongly kicked against the outburst of fake PhDs and degrees.

The minister went on that the Tertiary Education Commission (TEC) has been very clear that nobody will use those qualifications to access opportunities in this country.

He added that it is wrong when people are trying to politicise the issue of fake degree and university proliferations in Sierra Leone, when it has a very long existence in the country since back in the 80s.

He said as a government with focus on human capital development; “we have officially repeatedly informed the general public that Dominion and AGU are not recognised universities in Sierra Leone. We know some of the names listed in the fake saga are bright people who are ordinarily and competitively capable to have genuine degree in other credible universities. So I will encourage them to renounce the fakes and go for genuine degrees”.

Minister Swaray went on: “This is very worrying, we have a generation where government is investing 22% of the country’s national budget on and someday if they noticed there are shortcuts to have terminal professional degrees it will deter the efforts of government.”

However, he said through the TEC, government has made it clear that any degree acquired from these named fake universities will not be recognised.

“As long as it is bordered on inflicting challenges on education, government will not in any way treat this matter lightly and through appropriate bodies, it is now government’s decision to institute full-scale investigations”. Minister Swaray concluded.

A PhD is a globally recognised postgraduate academic degree awarded by universities and higher education institutions to a candidate who has submitted a thesis or dissertation, based on extensive and original research in their chosen field.