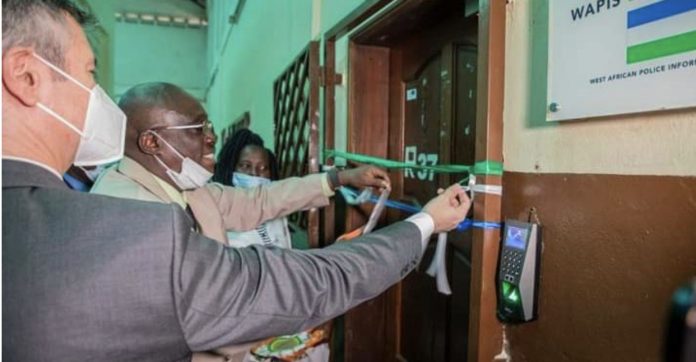 An information sharing platform designed to enhance regional response to criminal threats has been inaugurated in Sierra Leone.

The National Crime Management System-West African Police Information System (NCMS-WAPIS) is an initiative of West African countries under the Economic Community of West African States (ECOWAS) and the international police organization INTERPOL, which is aimed at building an effective response to national, regional and international criminal threats, including transnational organised crime and terrorism.

WAPIS is designed to enhance the capacity of law enforcement agencies within the sub region to fight these criminal threats effectively, by improving their capacities to collect, process and analyse information, and to share information among national security bodies and with other countries in the region and beyond through INTERPOL.

The initiative is funded by the European Union, under a multiannual programme (2012-2022). It is implemented by INTERPOL, in collaboration with ECOWAS.

All 15 member countries of ECOWAS are part of the programme.

The initiative to create WAPIS started far back in 2010, following a meeting of West African Police Chiefs, who raised concerns on the sub region becoming a crime hub for drug trafficking, human smuggling and terrorism.

Implementation started in 2012, and Mali, Benin and Niger became the first countries to launch their systems in 2015.

The programme was extended to Sierra Leone in 2017 and a Memorandum of Understanding was signed with INTERPOL for the operationalization of WAPIS in 2019.

Sierra Leone’s Chief Minister, Jacob Jusu Saffa, presided over the inauguration ceremony of the system at the CID Headquarters in Freetown, where it is hosted, according to a news dispatch released by the ECOWAS Commission on Monday.

Officials say the facility, which is also a data collection and registration center, will strengthen Sierra Leone’s security architecture thereby operationalizing the WAPIS System in the country.

The WAPIS Programme will see the creation of national police data systems in each ECOWAS member state and Mauritania and Chad. The system will be used at three levels: national, regional and global.

The Center will also promote the sharing of criminal data in real time, thereby supporting the investigation of major crimes and the frontline officers in dealing with the movement of persons and goods at the border crossing points.

At regional level, national systems are networked into a regional information-sharing platform to exchange police data among countries.

Monday’s inauguration ceremony was attended by government officials, as well as diplomats, including the head of Political section of the European Union Delegation in Sierra Leone, and the head of INTERPOL WAPIS Programme.

Chief Minister Saffa described the launching as a major step in improving the country’s response to fighting crime. He also affirmed the Sierra Leone government’s commitment to support the sustainability of the project.

“I must emphasize that the New Direction Manifesto promised to develop the capacity of police to combat crimes. And this project is in support of that promise made by government,” he said.

Sierra Leone’s Inspector General of Police, Ambrose Sovula, recalled that since the inception of the WAPIS programme, a lot of collaborative efforts have been made in establishing the center in the country. He cited the development of relevant frameworks and regulations, staff trainings, and allocation of office complex.

According to Richard Gotwe, the head of the WAPIS Programme, Interpol has deployed 80 workstations within major areas of Freetown, including Lumley Police Station, Rose Road Police Station, the Immigration Department, and the Anti-Corruption Commission, as part of the network. The preparation towards the inauguration also entailed training for 50 law enforcement personnel on national crime management system, he said.1